As a kid, Pokémon was undoubtedly my favorite franchise. I played through all of the games dozens of times, I watched the TV show, I had trading cards and toys, I loved everything Pokémon. When Pokémon Mystery Dungeon: Red Rescue Team came out in 2005, I happily played it despite it being a spin-off with little resemblance to the main games. This rogue-lite dungeon crawler with a Pokémon skin remained a fond memory of mine, so when it was announced it was getting a remake in 2020, I was ecstatic to revisit it. The main concern I had for the game was whether its gameplay would still be enjoyable so many years later. Spoiler alert: it isn’t. 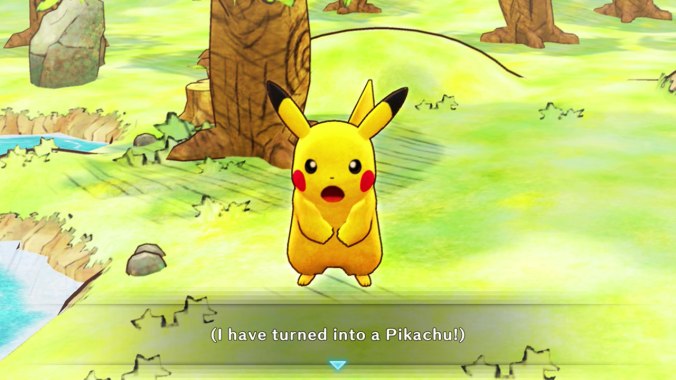 What I wasn’t worried about was the game’s sense of charm. I bought the game during my final semester of college, with many projects and final exams looming, and in the height of the COVID-19 lock-down. It suffices to say that I was looking for a relaxing and wholesome game during these stressful times. Pokémon Mystery Dungeon: Rescue Team DX has charm in spades. The premise of the game is that you play as a Pokémon, teaming up with some Poké-pals to rescue others who are in trouble. You form a rescue team in a small village, undertaking missions to help others and raise your reputation. The music, visuals, and the wholesome nature of the game does an excellent job at establishing the comforting environment that I was looking for.

The main issue that I had with Pokémon Mystery Dungeon: Rescue Team DX is not really the game’s fault. It’s a remake of a 2005 game, and as such it must emulate the core mechanics of the original. The thing is, the gameplay of the original game was an outdated formula back when it was released fifteen years ago. In 2020, a dungeon crawler of this nature is outdone by its peers. In Pokémon Mystery Dungeon: Rescue Team DX, you enter randomly generated dungeons, exploring each floor, and progressing deeper and deeper until you reach your goal. There are items to pick up, adversarial Pokémon to battle, helpless inhabitants to rescue, and even a few bosses to fight. The game is played on a square grid, and is turn based. When you move a space forward, so do all of the other Pokémon that happen to be in the dungeon.

When an opposing Pokémon gets in your way, you can take it down with whatever moves that you and your party have at your disposal. There is a small chance that defeating an enemy will inspire them to join your cause. As a dungeon crawler, you proceed floor by floor, searching for the next staircase to progress. Inventory management plays a crucial role as you must keep an ample supply of food, healing items, and other trinkets that may assist on your journey. The problem with all of this is that the game is completely brainless. You can completely zone out, just walk through the dungeon searching for the next floor, and whenever you encounter an enemy you just pick the best move to dispatch of them as soon as possible. There is very little strategy, planning, skill, or nuance of any sort.

I understand that the Pokémon series is meant to be accessible by everyone, including little kids. But there is a difference between an easy game and a repetitive grind. Unfortunately, Pokémon Mystery Dungeon: Rescue Team DX is the latter. Every mission plays out the exact same way, and there is very little the player can do to spice things up. You can switch party members out, but for all of the story missions you need to keep two out of your three party slots as the main characters. It doesn’t allow for a lot of freedom when team-building. Moreover, there is not a great sense of progression either. You cannot even evolve until the post-game, so it doesn’t feel like there is a concrete goal to work towards. After a couple of ventures into a dungeon, I started to feel the tedium of the game set in.

The one exception to the repetitive and overly simple aspect of the game is the post-game content, which there is plenty of. The dungeons and quests after you complete the main story are slightly more challenging, and actually encourage building specific teams to take on certain dungeons and bosses. There is at least some element of strategic planning here. But it comes too little too late, as I was tired of the game’s repetitive formula by the time I had completed the main story.

On the bright side, Pokémon Mystery Dungeon: Rescue Team DX is at least a faithful remake of the original game. Other than a few minor changes, this game replicates the original experience, as a remake should. The new painterly art style is phenomenal, it exudes a warm feeling, perfect for the cozy atmosphere of the game. Another change was that the IQ system was reworked into a simpler system in which each Pokémon has a “rare quality” that has some significant effect on the party as a whole. I think this was a positive change, as I remember the IQ system being fairly confusing, but that could just because I played the original game when I was a little kid.

The final new change is that the player can now recruit more Pokémon in each dungeon if they are fortunate enough. You can still only bring three members into each dungeon, but now you can have a party of up to size eight if you were to recruit five additional Pokémon while traversing the dungeon. In the original game you could only recruit one additional Pokémon per dungeon, so this definitely makes collecting new allies a simpler affair. The downside here is that having too many allies can trivialize dungeons and boss fights. It’s already an easy game, and it only becomes easier when you have twice the party members that you were originally intended to have. Instead of allowing you to have eight members in a party, I wish you could simply recruit new Pokémon without them being a member of the party immediately. This would keep the benefit of being able to recruit new team members beyond the one additional Pokémon per dungeon, but also avoid trivializing the entire game.