With its evolution from PS Vita to PS4, I had high hopes for the Gravity Rush series. Unfortunately, Gravity Rush 2 missed the mark of my expectations and left me disappointed. The original Gravity Rush had vibrant characters, an exciting world, and unique gameplay, but it was hindered by its lack of scope and general repetition. Gravity Rush 2 inherited all of the great things from the original game, but the menial gameplay was also brought along. It’s a shame because Gravity Rush has tremendous potential as a series, but it is squandered by painfully boring missions.

It is undeniable that the characters of Gravity Rush 2 are incredibly likable. Kat remains as a bubbly and exuberant as ever, but Gravity Rush 2 introduces some equally lovable heroes. Also, a stronger focus on returning characters such as Raven and Sid is a welcome addition. Undoubtedly, the largest improvement was to the world itself. The original Gravity Rush took place within the confines of the flying city of Hekseville. Gravity Rush 2 progresses through multiple settlements and cities, taking a deeper look at life in this fantasy world. Moreover, the vibrant artstyle brings plenty of life and character to the setting of Gravity Rush 2. 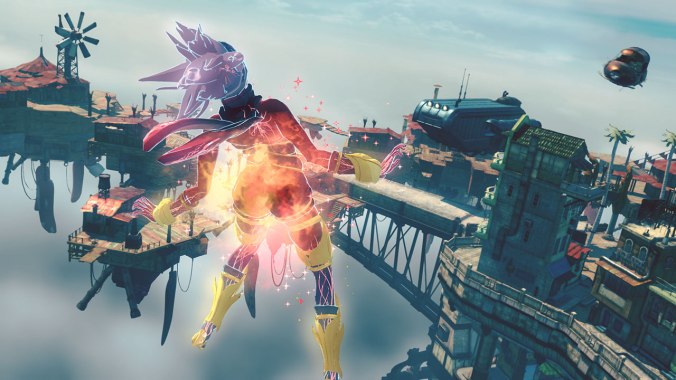 Initially, the player starts in Banga, a mining settlement which is no more than a loose collection of shanties and huts. The people of Banga fly through the skies, stopping at pits of ore that they collect that is used to power the flying machines. The nomadic miners sell the ore to the flourishing city of Jirga Para Lhao. This metropolis is a collection of floating islands, separated into economic sections. The verticality and scope of Jirga Para Lhao is truly astonishing, and it serves a phenomenal example of a memorable game world. At the very bottom of the city is a rundown slum, overcast by clouds and the islands above it. The central level is a bright and lively marketplace, while the top level consists of mansions and private islands.

Unsurprisingly, the theme for much of Gravity Rush 2 is class inequality. While Kat tries to recount her past, her helpful personality leads to her uncovering exploitation and abuse of power. Kat motivates the downtrodden people of Banga and Jirga Para Lhao to rebel against their corrupt government. It’s not a revolutionary plot-line, but it was heartwarming. After that story-line, Gravity Rush 2 enters complete insanity mode. Once the truth of Kat’s past begins to unfold, the interconnected nature of all the plot-lines becomes clear. It’s hard to accurately describe the ending of Gravity Rush 2 without spoiling too much. It suffices to say that time-distortion and higher-power beings play an integral role in the final chapter. Throughout the series I was worried that all of the seemingly disjointed threads would never be connected, but I was thoroughly satisfied by the over-the-top conclusion.

While the presentation of Gravity Rush 2 is stunning, I was incredibly disappointed by just how banal the gameplay actually was. Most missions fell into a few different archetypes, the vast majority of which were just flat out uninteresting. The most common thing the player is tasked with is flying to various waypoints. While this makes use of the fairly fun flying system, most of the time you are just repeatedly flying in a straight line from island to island. Many of the missions consist of flying around searching for a needle in a haystack. The game will give you a general location of your objective, but you have to painstakingly comb the area for what you are searching for. The absolute worst is when you have to talk to every nondescript NPC you can find and hope that is the right person. These sections are nothing but a frustrating waste of time. To make matters worse, many side-missions strip away your gravity powers entirely. This is odd considering that the premise of the game is to shift gravity.

For some bizarre reason, Gravity Rush 2 implemented a significant number of stealth missions. The core prospect of the game is being free to manipulate gravity and zip around the city, so being forced to slowly walk around in a stealth mission is an obnoxious interruption. The mission structure of the game sucks out any modicum of fun that could’ve been drawn from the game’s unique concept. The optional side-missions could’ve been a great asset to the game, as they let the player interact more with the beautiful world and characters. It’s a shame that they are so mundane and offer pitiful rewards. Gestures and objects to be used in the game’s photography-mode is not a suitable reward for a 45-minute long side-mission. While I gave up on doing many of the side-missions, the main-missions of the game are not any better. 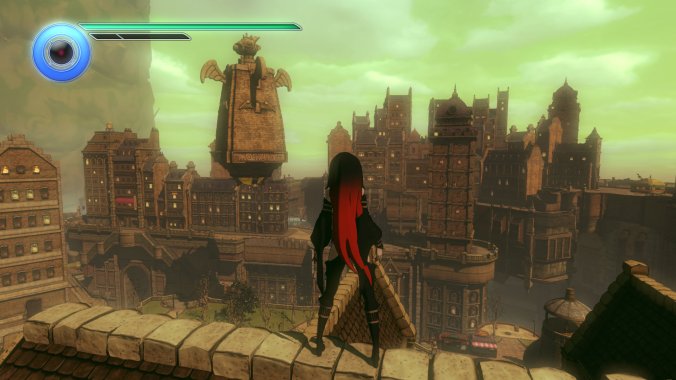 I heavily criticized the original Gravity Rush for its combat system. Luckily, Gravity Rush 2 has made significant improvements to the diversity of the player’s tool set. I no longer had to spam the gravity kick repeatedly, as the standard kick and gravity throw have been upgraded to actually serve a purpose. The standard kick, while still weak, is used to charge up the player’s special gauge which is used to unleash more powerful attacks. The gravity throw was substantially improved as it’s radius for grabbing nearby objects was greatly increased. Also, it can be used to grab some of the game’s weaker enemies. I will always get a kick out of flinging some poor guy at his friends like some sort of human bowling ball. 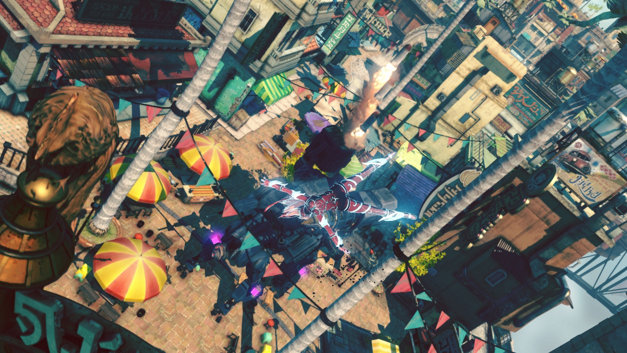 The other way that the game improves upon some of the combat repetition is by adding some additional styles. The new Lunar style decreases the effects of gravity and makes Kat much lighter. This is critical for fighting airborne enemies who can otherwise be a nuisance. Conversely is the Jupiter style, which greatly increase gravity and makes Kat much slower and clunkier. She deals much more damage, but is far more unwieldy. I didn’t make much use of these additional styles because they both made Kat much harder to precisely control, but they both have merit in specific situations. 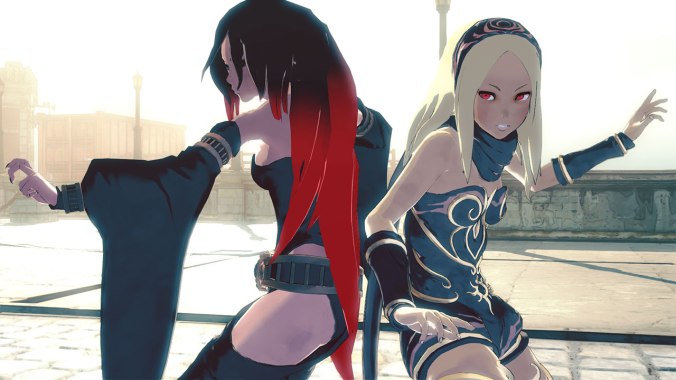 Even with the addition of the new styles and improved combat, I still felt like the combat of Gravity Rush 2 was lacking in a few regards. Most fights still just consisted of spamming either the gravity kick or gravity throw. Also, I felt like I was fighting the camera just as much as I was fighting the enemies. If you miss your gravity kick by a little bit, be prepared to massively disoriented. Additionally, a few areas existed in such tight confines that it was incredibly difficult to make accurate use of any gravity shifting powers. As a result, the combat was mediocre and not nearly enough to carry the rest of the game’s shortcomings.

I really wanted to like Gravity Rush 2. I was enthralled by its world and excited by its premise. The original game showed plenty of promise but needed to reduce repetition, but it seems the sequel has just doubled down on these flaws. I rarely found myself having fun with the game, and every mission felt like a chore. I don’t know how you take the concept of being a gravity shifting superhero and turn it into a game where you mostly do menial chores like handing out flyers and bringing people from one place to another like some sort of glorified taxi service. Still, the game’s presentation is absolutely stunning. It is for these reasons I give Gravity Rush 2 a 5.5/10. I was incredibly disappointed that the missions were so fumbled so badly that it dragged down the more promising aspects of the game.