This is a game about a boy and his dog. Well, not exactly a dog. The main character wakes up in a cave alongside a giant, hulking beast. This creature is some sort of dog-bird-cat chimera that the boy subsequently frees from its chains. The heart of the game is the boy and the beast, known as Trico, traveling through a dilapidated city. The boy has no knowledge of how he arrived in the sprawling and ancient metropolis, but it is apparent that he wants to escape. The boy and Trico must rely on each other to progress, and as a result the game is about their growing bond and friendship.

The story of the game is mostly about the journey of the boy and Trico. There is a narrator who acts as a hint system as well as a few sparse cutscenes, but the vast majority of the game is a silent adventure. The interactions of Trico and the player is plenty to convey their developing companionship. Trico’s animations in particular are gorgeously animated, it is seriously impressive how lifelike and playful this feathery creature is. The atmosphere is equally as remarkable. The ancient city is rife with details as well as awe-inspiring vistas. Every environment stirs the imagination. The art direction and meticulously designed architecture are breathtaking. The crumbling interiors, the overflowing lush foliage, the interconnected towers that reach to the sky, everything contributes to the memorable world of The Last Guardian. 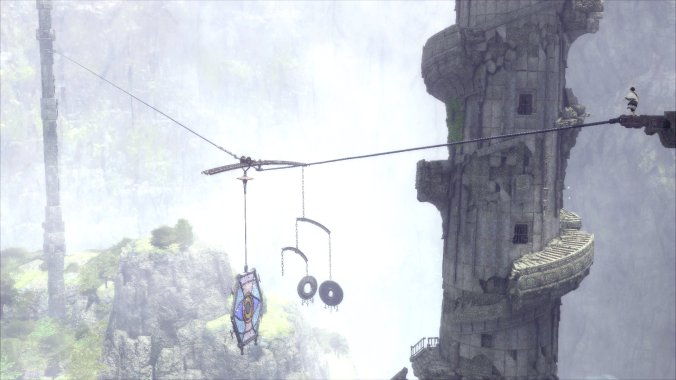 In the beginning, the boy and Trico are apprehensive of each other. Despite feeding, freeing, and assisting Trico, the beast does not fully trust the player. The pair eventually learn how reliant they are on each other. The standard gameplay is as simple as progressing from room to room, area to area. Sometimes you are impeded by simple environmental puzzles, you often have to open gates for Trico to progress. Mostly, you will be using Trico and his size to help you reach high up places, or he can make leaps across large gaps. As you progress, the boy continues to feed, pet, ride, and command Trico. The development of the pair’s relationship is magical, Trico eventually becomes staunchly loyal and fiercely protective of the boy. The evolution of their relationship is the absolute highlight of the game, and it is what makes the experience so emotional. 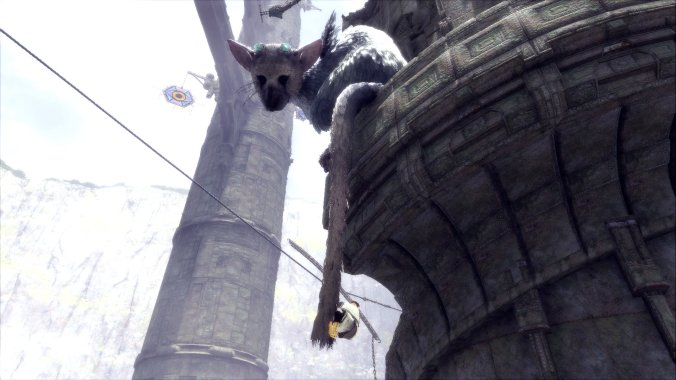 As a result of the story being the core focus, the gameplay of The Last Guardian is simple. As I previously mentioned the game mostly consists of simple puzzles to progress forward. These puzzles aren’t complex, but instead are just speed-bumps on your grand adventure. The majority of the time a puzzle consists of two parts: deduce how to use Trico to advance, and then figure out a way for Trico to come along with you. Along the journey, the boy and Trico will encounter a few more interesting obstacles. Possessed suits of armor chase the boy and attempt to drag him away. The young boy has no means of combat, so you must evade enemies while Trico smashes them. This mix of evasion and spectacle was quite satisfying. Watching your companion absolutely destroy the foes like they were toys is viscerally entertaining. There is an air of mystery in The Last Guardian, the background of Trico, the city, and the soldiers is unknown. 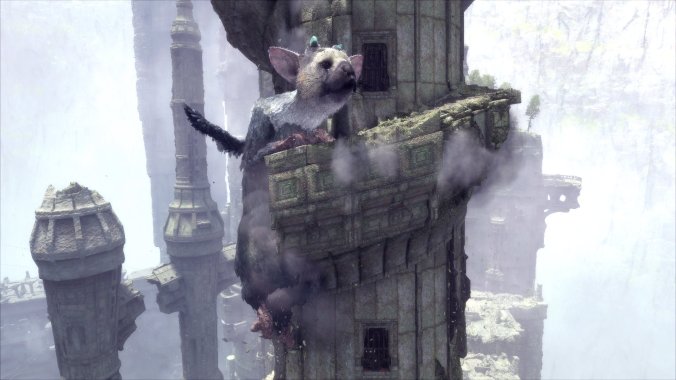 Despite everything that The Last Guardian does correctly, the game is plagued by frustrating problems. The most forgivable of those nuisances is Trico himself. In an effort to make Trico seem like a real, living, thinking, and independent being, he was essentially given a mind of his own. Often times Trico will not listen to your commands. He is curious and playful, and will often wander off to do his own thing. This can be enormously annoying to many players, as sometimes you just want to play the game and move forward but Trico won’t cooperate. Trico’s stubbornness wasn’t a big deal to me, some patience is required to deal with him. His independence is absolutely necessary to masterfully portray him as a living being rather than just a tool for gameplay. 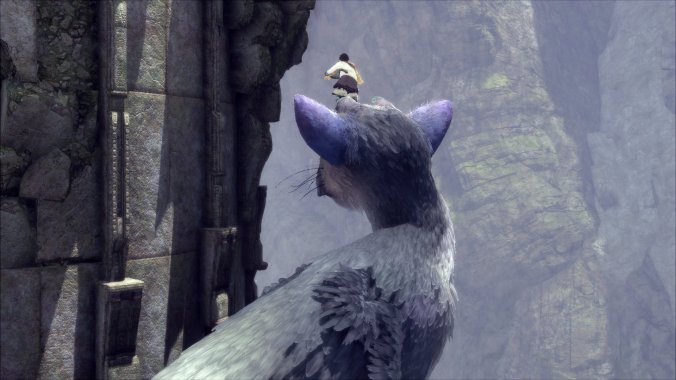 What is less forgivable than Trico’s stubbornness is the boy’s horrible controls. Nothing about controls is intuitive or particularly responsive. The boy has two speeds: full sprint and tiptoeing. Additionally, there is a strange weight to the character, he constantly feels bogged down by some invisible force. It’s hard to explain, but it is immediately apparent when you being playing the game. The boy constantly stumbles, bumps into things and falls over, and is generally unwieldy. There is a fair amount of platforming, jumping from place to place, but the imprecise controls make this an exercise in aggravation. Every single action you do is so deliberate and slow that I was getting impatient. Everything takes way too long. The worst offender of this is getting on and off of Trico. This is the absolute core mechanic of the game, and it simply does not work.

Trico is gargantuan, and climbing on him is a monotonous task. The boy climbs needlessly slow, and often gets stuck on Trico’s wings, legs, chest, or tail. The only thing worse than getting on Trico is getting off of Trico. For some reason the developers decided that it was a genius idea to make the boy automatically grab onto things when he is falling. This is nice when platforming as it allows you to grab onto ledges easily. In the case of getting off of Trico, everything is grabbable. His entire body is one big sticky pad. So, when jumping off of Trico you immediately latch back on. I just want to get off of Trico, why is it so hard?

I know faithful defenders of this game claim its controls are intentional, but that’s not a good excuse. You can make a realistic feeling character that doesn’t make you want to rip your hair out. The Witcher 3: Wild Hunt and Metal Gear Solid V: The Phantom Pain are examples of games with weighty and realistic characters that aren’t imprecise or unresponsive. In the case of The Last Guardian, the clumsiness of the controls adds nothing. Games like Human Fall Flat utilize unwieldy controls for comedic effect. Stephen’s Sausage Roll uses its strange control scheme to allow for complex puzzles. These are valid reasons for unintuitive controls. The Last Guardian has no excuse. I get that the main character is a young boy and shouldn’t be an acrobat like Mario, but that doesn’t explain why he moves likes he’s inebriated. 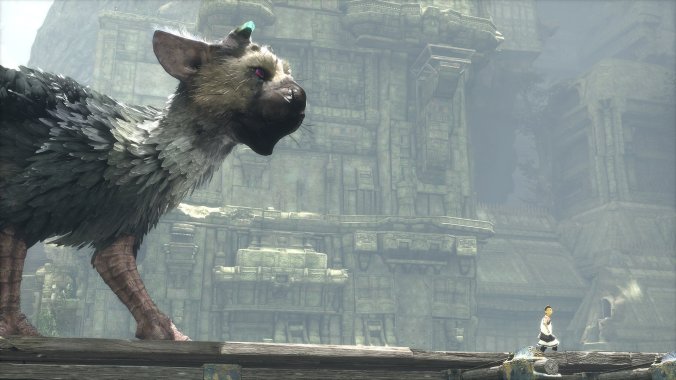 While I praised the game for its gorgeous world building, impeccable details, and lifelike animations, these all result in a less than stellar framerate. I’m not one of those elitists that demands that all games must run at 60 FPS. If I’m getting a steady 30 FPS, I’m happy. However, The Last Guardian has performance issues that often dips the FPS into very noticeable territory. This happened often enough that it became an irritant. Worse than the performance issue is the dated camera. 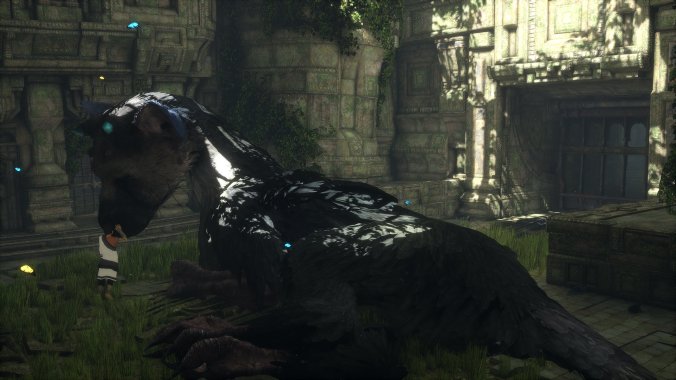 Making seamless cameras for third-person video games is hard, but this is an issue that has been solved many times over by plenty of games. The camera has a strange acceleration delay, when you start trying to maneuver the camera it moves extremely slowly. Moreover, the camera is like Trico, it does what it wants. The game often tries to pan to show you the environment or Trico, but this often gets in the way of what the player actually wants to look at. If I’m trying to make a jump or scale a tower, I don’t want to have to battle with the camera the whole time. It gets especially bad in narrow corridors because then the camera gets wedged between Trico and the wall, meaning you get to appreciate a black screen for upwards of thirty seconds.

The overall level design of the game can often be confusing. It is not always apparent what you can jump on, hang on, or what Trico can leap to. The gorgeous world came with the expense of readability. There are so many details that it can be hard to tell what you can actually interact with. The worst offender of this unclearness is when you need Trico to do something. As I stated prior, getting Trico to do anything can be tough because of his stubbornness. So, when it is unclear how to progress it can be a real struggle to test out potential solutions. Is Trico not jumping to that platform because he’s just being stubborn, or is it because that’s not a platform he can even jump to? Situations like these are abundant in The Last Guardian. 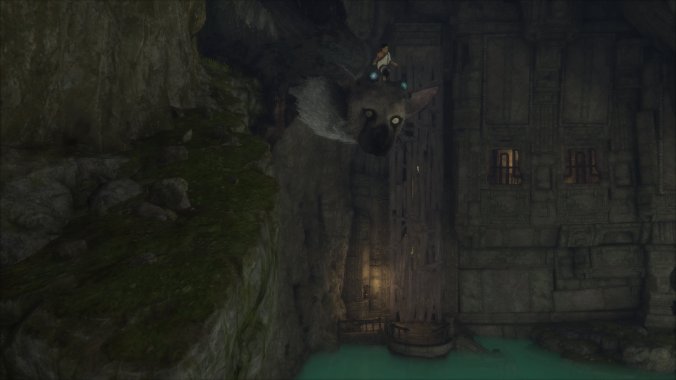 The most insidious issue of The Last Guardian is its tendency to just not work sometimes. The game can be particularly picky when it comes to solutions to its puzzles. You may have found the right solution right away, try it, but then it doesn’t work for whatever reason. Some examples of this: Trico won’t make a jump, the boy doesn’t grab a ledge, Trico refuses execute whatever scripted action you need to progress. This is a colossal waste of time because once you try a solution to a puzzle and it doesn’t work, you immediately start trying other possibilities. But if the first solution was actually correct, you may just be going in circles and wasting your time. The worst offender of this for me was during a puzzle in which I was supposed to feed Trico. The goal was to feed Trico numerous barrels to give him energy to continue. After collecting every barrel, I fed them to him, but nothing happened so I figured I must have missed one somewhere. I spent 30 minutes searching for this non-existent barrel. It turns out a cutscene was supposed to play and Trico would get up, but this never happened for me. I had to restart from a checkpoint and do the whole puzzle over again.

It may sound like I hate The Last Guardian, but I don’t. I think it’s a shame that a game with such high potential stemming from its unique concept, stunning architecture, immersive atmosphere, and powerful emotional bonds is bogged down by generally technical issues. The camera, framerate, and controls feel like remnants from a prior era. I really wish I could get past the frustrations that I had with the game. When the game clicks and everything works, it is a truly magical experience. Unfortunately, those moments are few and far between. Regardless, it is a truly memorable experience despite its flaws. Even though the game angered me on numerous occasions, I nearly cried at the end, which should say a lot about the raw emotions this game conveys. It is for these reasons I give The Last Guardian a 5/10. Your enjoyment of this game is directly proportional to your patience and your tolerance to its clunky gameplay.