Without a doubt, the most oversaturated genre of game right now are open-world adventure games. Many that fall into this category fall into the same rote routine established by the original Assassin’s Creed over a decade ago. Climb towers to reveal the map, collect a horde of useless trinkets, complete mundane side quests, explore a barren open-world environment, and progress through a fairly uninteresting plot. These games are often uninspired and suffer because they put all their resources into creating a vast world rather than focusing on a few aspects and perfecting them. “Quality over quantity” is the mantra that I wish many of these developers would adopt. At a cursory glance, Horizon Zero Dawn seems to fit into the category of generic open-world game but reskinned with robots. Luckily, upon playing the game I was pleasantly surprised by many aspects of Horizon Zero Dawn. 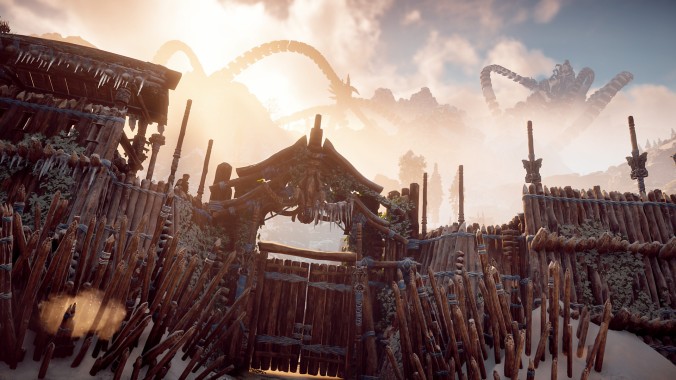 One of the most enticing features of Horizon Zero Dawn is its setting and environment. Sure, a post-apocalyptic scenario is extremely common in games, but Horizon Zero Dawn stands out in a few ways. Most obviously, the player will mostly be fighting rogue robots and machines. This provides an entirely new perspective to combat that is absent when fighting stereotypical humans, monsters, or the like. ­In this world, humans are organized into tribes with minimal technology to fend off the aggressive machines. Moreover, Horizon Zero Dawn is environmentally rich and has a variety of biomes to appreciate, I never get the feeling of “everything looks the same”. It is common for these doom-and-gloom post-apocalyptic games to be set in a dark and unsettling environment, but Horizon Zero Dawn is undeniably beautiful. With its rich environments, realistic art direction, and well-made graphics and visuals, this game is breathtaking. 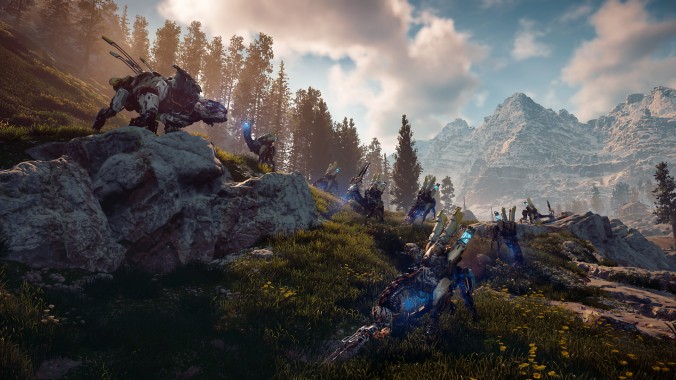 While I did eventually learn to enjoy Horizon Zero Dawn, it does have a remarkably slow start that initially made me dislike the game. The strengths of the game, such as the story and unique combat system, do not become apparent until a few hours into the playthrough. The game spews exposition, dialogue, and cutscenes at the player for the first few hours, leaving me bored and wondering when the real game was about to start. Even with the overabundance of storytelling, I did not become invested in the plot early on. It is difficult to really get into the story when the game is non-stop spitting narrative at you. I feel like you have to give the player time to process events instead of rapid-fire spitting conversations at them. There is meant to be a narrative hook of mystery regarding the backstory of the main character, Aloy. Unfortunately, the game gives the reasonably astute player way too many hints of Aloy’s origin so any level of intrigue is compromised. Additionally, the gameplay of Horizon Zero Dawn shines when battling larger and tougher enemies, which there is a distinct lack of early on in the game.

The combat in Horizon Zero Dawn is what I consider to be its shining feature. You fight large machines, which often resemble animals or dinosaurs, using a few ancient tools. Aloy’s main weapon is a bow, but there are a number of additional weapons such as slingshots, spears, or traps to give the player some agency on how they want to approach any given encounter. Initially I thought this system was the same as any other game, just with robots as your primary enemy. However, as I progressed further into the game, I became enthralled with the system. Horizon Zero Dawn phenomenally utilizes weak spots and elemental attacks to make the player really feel like a hunter learning its prey. Every type of machine has components that act as subsystems, and as you destroy those components, you disable certain functions of that robot. As you scan machines, you can gloss over what their components are and prioritize which are the most important to destroy first. You can even pick up things like machine guns or rocket launchers that get knocked off of the robots to use against the machines.

Additionally, many of the components react to different elements. Some contain flammable fluid that will create an explosion when hit with fire. Others contain coolant that will freeze the enemy. Some components are just flat out weak spots that you will do bonus damage to if you hit. The machines are obviously heavily armored, so if you just shoot arrows haphazardly you will do pitiful damage. You have to either hit a weak spot, destroy a component, or blow off the armored plating entirely if you want to do substantial damage. This is why I absolutely love battling the biggest and meanest enemies Horizon Zero Dawn has to offer. These enemies feel like raid bosses, and not just giant health sponges that require more time than skill to defeat. The player cannot just blindly fire away, chip away at the health pool, and hope for success. The gargantuan robots force the player to strategize and prioritize which components are the most important to disable. Truthfully, I wish there were far more of these types of opponents in Horizon Zero Dawn. There are about 3-5 types of these raid boss robots, and most of the other enemies in the game pale in comparison. Most of the smaller robots and humans do not require much strategy or planning. 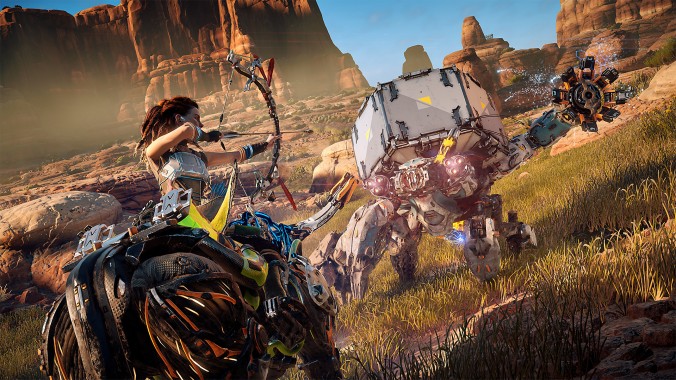 Moreover, due to the use of ancient weaponry, movement is a bit slow and deliberate. This is fine, except when facing larger hordes of weaker enemies. It can be difficult to pull the drawstring back and aim properly when being swarmed by five or six quick moving enemies. In these scenarios the player mostly has to resort to stealth to pick off a few enemies before engaging. It’s not bad in essence, but I would much rather be hunting one of the colossal machines. This is why I found it hard to get engaged early on in the game, fighting the tutorial-esque enemies provided no challenge, thought, and did not force the player to utilize the ability to knock off key components of the machines.

It should come as no surprise to anyone who’s heard anything about this game that it is highly lauded for its story. Essentially, the player follows a few storylines at the same time, mainly the present and the past. You must uncover why human civilization fell thousands of years ago, and connect it to why machines suddenly start attacking in the present. This combined with tribal relations, Aloy’s backstory, and the intrigue of cultist groups provide numerous plot threads that all weave and braid together. The story of the past is mostly told through holograms, recordings, and text logs, but it still manages to be just as important and interesting as the rest of the plotlines. I won’t go into anymore detail because I try to keep my reviews spoiler free, but you can be assured that Horizon Zero Dawn will captivate you once you get deep into its narrative.

Aside from its slow start, Horizon Zero Dawn does suffer a little bit because of its insistence to follow the generic open-world formula. You have to climb tall robots to reveal the map, there are a ton of collectibles that amount to nothing, there are plenty of filler quests meant to just pad out game time, and a ton of fairly useless objectives scattered across the map. None of this was a big deal, at worst you can just ignore many of these features if you are not interested in doing them. And to be fair they do provide a decent amount of content for people who do like to explore and complete a checklist of objectives. I think I would have preferred if resources were allocated to bettering the core game rather than making a generic open-world, such as including more boss-like machines. The open-world is not bad, it is just an incredibly saturated market and perhaps Horizon Zero Dawn would have benefited from being a little more niche.

I was generally pretty impressed by Horizon Zero Dawn. The unique combat system in particular is what kept me playing. The first four to five hours of playing, the game just did not click for me; I thought it was generic and repetitive. Eventually it clicked, and I started to greatly enjoy my time with Horizon Zero Dawn. Hunting the large machines was an absolute joy, I just wish there was more of it. It is for these reasons I give Horizon Zero Dawn a 7.5/10. The slow beginning and at times repetitive open-world gameplay do set Horizon Zero Dawn back, but the rest of the game makes up for its shortcomings.