With the surging popularity of indie games, the genre of metroidvanias also is rapidly being filled with dozens of new games every year. As such, it can be difficult for a metroidvania to stand out amongst its peers. That being said, there are a few games that do manage to accomplish this. Games like Hollow Knight as well as Ori and the Blind Forest achieve this through strong level design, beautiful visuals, gratifying combat, and tight platforming. When I picked up Axiom Verge, I was hoping for a modernization of the game that birthed the genre: Metroid. While Axiom Verge did capture a lot of what Metroid was about, it does not manage to stand out amongst its peers. 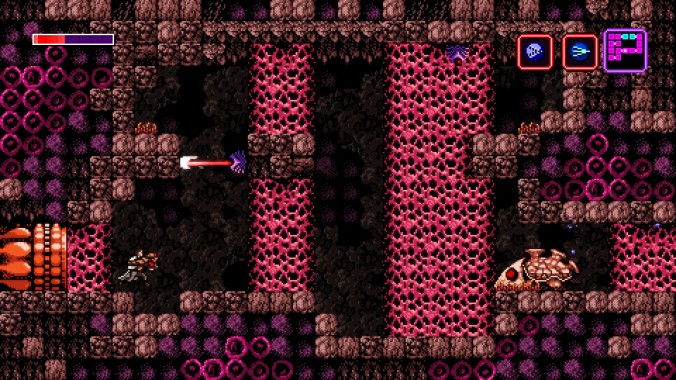 To me, the key of a successful metroidvania is first and foremost level design. The genre is ripe with backtracking and revisiting previous areas. Developers should work to minimize just straight backtracking, and should try to implement it in a more intriguing way. Looping paths that lead back to the beginning of an area, creative shortcuts to cut down on wasted time, or even implementing fast travel can cut down on unnecessary tedium. Axiom Verge does essentially none of this. Areas rarely loop into each other and are mostly linear paths from start to end, and there is no form of fast travel. There is one shortcut to take the player from one end of the map to the other, but it is not available until fairly late into the game. Traveling from area to area in Axiom Verge can be a giant waste of time. And this is compounded by the fact that there is also a heap of aimless wandering. 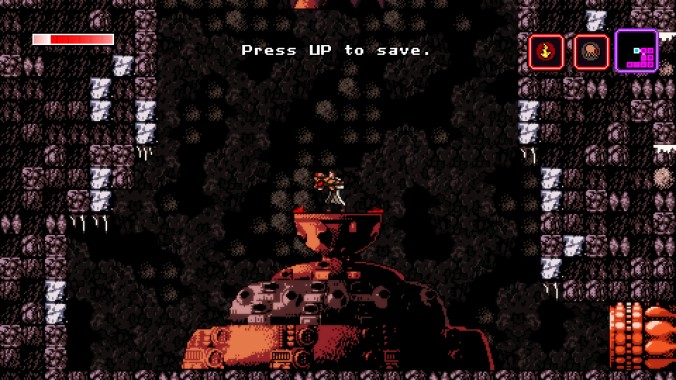 As Axiom Verge is obviously inspired by the original Metroid from over 30 years ago, it carried over some archaic design concepts, but it also does not fall into the pitfalls of many modern-day games. Many modern games unfortunately do not trust their player’s abilities and often resort to handholding. This is patronizing and takes control away from the player. Axiom Verge has absolutely no handholding as essentially no direction is given. I usually like being given complete control of where I go, but this combined with the difficulty of traversing the map frequently frustrated me. Figuring out where to go next can be a daunting task, and when you have to tediously wander back and forth to find a passageway that you missed you can easily grow irritated. With better level design, or even fast travel, this issue could have been alleviated. Luckily, Axiom Verge does implement clever ways to prevent the player from going too far backward. Still, I was often wandering through large areas repeatedly to find what I had missed.

Combat is another core component of any metroidvania, and most games for that matter. Axiom Verge is a shooter similar to Metroid. You can aim in a few different directions and use a variety of different weapons to blast through aliens. You can amass a collection of weapons, each with vastly different damage, firing-rates, and the like. Some weapons shoot a close-range burst of electricity, others spray a lot of low-damage projectiles in a wide pattern. While some weapons are strictly better than others, the player is given a lot of freedom to test and find a weapon that suits them. Unfortunately, it is hard to justify using a bunch of different guns when one or two heavily outclass the others.

Battling the enemies in Axiom Verge is fairly static. Most of the time you can sit in one spot and shoot until the enemy is dead. It is not incredibly engaging or interesting, and the enemies respawn often enough that trudging back and forth through areas can be tedious. This issue is made worse because most of the environments look similar to one another. The one most interesting aspect of combat is the dashing ability, which is not unlocked until fairly late in the game. Worse still, the controls for executing the dash are ridiculously bad. Double tapping the control stick leads to plenty of accidental dashes, and it is difficult to execute in the moment when you actually want to dash. As far as I can tell, you cannot even rebind the dash to a button or key to make it more consistent. 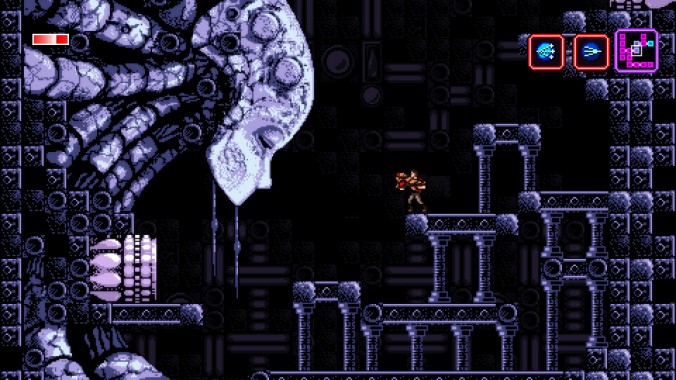 The singular aspect that I enjoyed most of Axiom Verge was the setting and theme of the game. You play as a scientist who gets transported into some sort of “glitch world”. A catastrophe happened here, and you must restore the inhabitants and escape. The story is filled with mystery as you uncover who unleashed a plague upon this world. The idea is also implemented into gameplay pretty well. One of the tools that is unlocked is a decoder that can clear glitches that are blocking your path. This decoder can also be used on enemies to scramble them and turn them into weaker variants of themselves.

Overall, I feel like I enjoy the idea of Axiom Verge, but it just felt dated to me. It took almost too much inspiration from Metroid, and did not update or modernize many of the features. It is a decent metroidvania, but its hard to justify recommending it when there are dozens of more unique and tightly crafted games in the same genre. The dated combat, antiquated exploration, and low-bit graphics left me feeling like I was playing a game made in the early 1990s. If you want a retro metroidvania, Axiom Verge may be perfect for you. But if you want a fresh and unique take on the genre, then you would be better served to search elsewhere.