Currently, there are a slew of indie games available and many independent developers struggle to stand out. In the case of Moonlighter, the uniqueness stems from the games concept. Developer Digital Sun has created a dungeon crawler with an emphasis on shopkeeping. You play as Will, a merchant who has a propensity to delve into local dungeons and fight monsters to gather resources to sell on the marketplace. Is the concept alone enough to make Moonlighter stand above the rest, or does it fail to shine in a saturated marketplace?

I quite like the concept of Moonlighter as it puts an interesting twist on the standard formula of dungeon crawling. In most top-down adventure games you explore dungeons to gain experience, new equipment, and the progress further into the game. In Moonlighter, you tackle dungeons to collect items dropped by slain monsters. After filling up your inventory, you return back to your shop and spend 5-10 minutes selling the goods to accumulate wealth. You can use the gold acquired to renovate your shop, upgrade the town, and buy new equipment. As you get better equipment, you can delve deeper into the dungeons to fight harder monsters and eventually take on the boss of each dungeon. This is an extremely addictive feedback loop of dungeon crawling, selling the loot, upgrading your gear, and then going back to dungeon crawling. Each one of these cycles only takes about 20-30 minutes, so it is easy to hooked and play hours at a time.

After playing through some difficult games recently like the Devil May Cry series and Shenzhen I/O, Moonlighter was a much-needed wholesome experience. The gameplay is not overly tough, and the shopkeeping aspect of the game is a nice cooldown period between dungeon runs. Just relaxing in your store and watching townsfolk come in and buy goods is just a chill experience. This combined with the extremely well-done pixel art and calming music makes for a charming game. Moonlighter is an easy game to get into, and I found it to be a nice and relaxing game.

I wish that Moonlighter was a bit more innovative or at least went a little more in depth with the mechanics it had. As it stands, the game only really has 2 aspects: dungeon crawling and shopkeeping. I wish these were a little more fleshed out, as they are both fairly rudimentary. Dungeons are randomly generated, so each run will be different from the last. There are 4 different dungeon themes that get progressively more difficult: Golem, Forest, Desert, and Tech. Each dungeon has 3 floors and a boss at the end. The further you get in each run the better loot will become available. The problem is that all 4 of these dungeons are extremely similar. Just a reskinned background and tougher enemies. Once you complete the first dungeon, you have mostly seen everything Moonlighter has to offer. I wish each dungeon has its own unique twist to differentiate them from one another.

Other then the similarity between dungeons, Moonlighter also struggles in gameplay depth. Combat as a whole is extremely basic, sure there are 5 different types of weapons, but actually battling enemies is not complicated. Each weapon has a basic attack and a special function such as a shield, or spear charge, or charged punch. For the most part, I never used the special ability of any weapon and just spamming the basic attack was enough to defeat any enemy. I didn’t expect much innovation in combat, but I did expect more from the other half of the game. The shopkeeping is pretty barebones, and there is very little interaction with the town. Selling items mostly consists of just setting prices and chasing away the occasional thief. There is a little supply and demand that affect prices, but again the interaction is minimal. The biggest disappointment is that there is little to no gameplay revolving around the town. I really wish you could interact with the townspeople, explore the surrounding area, or do really anything. The town’s entire purpose is for the player to sell their loot and gear up for future expeditions. I did not expect anything incredibly innovative, but I wish Moonlighter just had more.

Other than its lack of innovation, Moonlighter has a few other minor issues. First and foremost, a few technical issues occurred during my playthrough. The game crashed twice and once I got stuck in a wall. These hiccups never destroyed significant progress, but its still a technical flaw. Hit registration feels a little off at times, sometimes my weapon would phase right through an enemy and other times a hit would register twice, dealing extra damage. Other than that, I feel there were some wonky balance issues as the game got closer to the end. I began making ludicrous amounts of money and I had no issues buying whatever I wanted from a single loot run. I only had to go into the games 4th dungeon three times total, when in the previous dungeons I had to do them seven to eight times to get fully upgraded. Maybe I just got better at optimization, but I think the gold amounts were just out of balance. Lastly, the sales box and banker upgrades are both entirely worthless and I have no idea why they were even included. 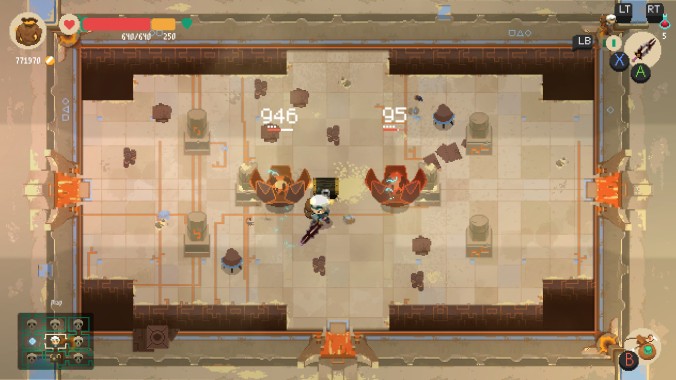 I think Moonlighter does do enough to make itself a worthwhile experience. Its not going to blow anyone’s mind, and it isn’t an innovative game. Still, the addicting progression loop and calming design made it an enjoyable game. I quite liked Moonlighter, I just wish there was a little more. Better combat, dungeon variety, or a more interactive town would have gone a long way to make Moonlighter more complete. It is for these reasons I give Moonlighter a 7/10. It’s not a revolutionary game, but its fun all the same.