The gameplay is enormously important in an action game, and for many reasons Devil May Cry 2 is an unmitigated mess. Dante is inexcusably slower than his previous iteration. Furthermore, gravity behaves strangely as you stick in the air longer than you should. The camera, which was the main issue in the original game, is somehow worse. It is no longer static and follows Dante around, but it often time is shifts enemies out of view. Another key issue is that the game automatically locks you on to the nearest enemy, which occasionally leads to frustration as you try to attack a boss but the game forces you to hit non-threatening enemies. Also, weapon variety was stripped down for the most part, now there are three very similar iteration of a basic sword, there may as well have only been one. To be honest, there may as well be no melee combat at all because of how ridiculously powerful the guns are.

Devil May Cry is all about being stylish and flashy, but there is no incentive to do that in Devil May Cry 2. Enemies take similar damage from guns as they do melee attacks, so there is no reason to put yourself in melee range and risk being hit. Furthermore, the enemy AI is so horrendously bad that if simply stand still and hold the shoot button most of the time no monster can even get close to you. To make matters worse, when comboing an enemy with the sword, at the end of the combo they will be knocked far across the screen. This means you have to chase down the opponent, which resets your style meter and is simply annoying. Worst of all, a large portion of enemies (and even bosses) can basically only be damaged by guns. You can try to hit them with melee strikes, but they are often times out of reach. All of these factors play into the biggest weakness Devil May Cry 2; it is just flat out boring. Holding down the shoot button does not make for compelling gameplay, but that is what Devil May Cry 2 mostly consists of. This style of gameplay is brain-dead and easy, which Devil May Cry should not be. 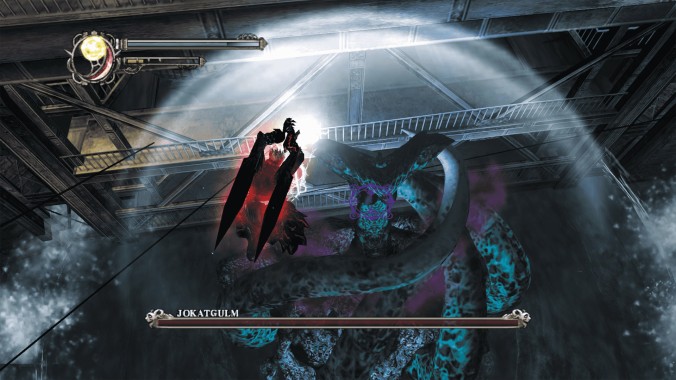 The original Devil May Cry was not renowned for its level design, which is why it is bizarre that Devil May Cry 2 is astonishingly worse. The original game had the player navigating a mansion and collecting keys to unlock new passageways and areas. If the player ever got lost, the mission screen would contain a tip and the map would usually point out where to go. While Devil May Cry 2 does not have the player progressing through one giant interconnected area, it still manages to be more confusing. Even though each level is linear and seemingly simple, sometimes the objective is never explained. There are no map objectives or mission tips, you just have to figure out what you are even supposed to be doing. Furthermore, the levels are far more open than the original game, meaning that a large portion of time is spent just walking from place to place.

Enemy variety is woefully sparse compared to the game’s predecessor. There are some enemy types that are just scaled up in health and changed in color. Enemies rarely get more challenging to fight, they just take longer to kill. The bosses are the worst of it. They have gargantuan health bars that are only tickled by your attacks. The only method of dealing substantial damage is by building and activating devil trigger. Most of the bosses are forgettable, but some are so bad that they are legendary. The hilariously uninspired “infested helicopter” is the obvious example of ineptitude. Essentially, this boss can rarely hit the player, but the player can only really damage it through gunfire. It is a 5-10 minute affair of simply holding the shoot button. The only good boss in the entire game is the final boss, the rest are either boring and forgettable or offensively bad. 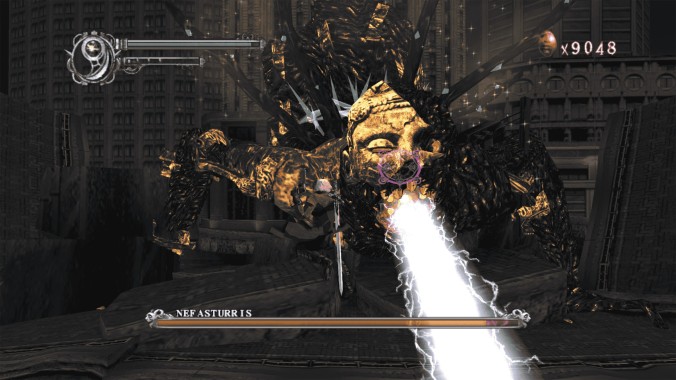 The thing that makes it evident that Devil May Cry 2 was a rushed mess was its disastrous story. The story is not something that I really care too much about in Devil May Cry, but the lack of any cohesive plot is what indicates that something went terribly wrong in development. There’s very few cutscenes or dialogue or any semblance of logic as to what is happening. You just kind of travel to a bunch of random locations for really no reason. Dante, who is supposed to be a cocky protagonist was completely silent and uninspired. Again, I am not expecting a whole lot of narrative genius in a Devil May Cry game, but the utter absence of any sort of storytelling was just odd. Devil May Cry 2 just feels like it was released a year before it was ready.

While it should be apparent that Devil May Cry 2 is an unmitigated disaster, it does introduce a few interesting things. First, there are two playable characters, each with their own campaign. The campaigns are very similar, but the I like the idea of having a new character with a new moveset. Another interesting addition was that the player has a few new parkour movements such as wall running. Lastly, if they player is low on health and activates devil trigger, they enter “majin form”. This new form is extremely powerful and gives you an option to blast through enemies if you are desperate and low on health. That’s about it for the positives.