Like its predecessor, Wolfenstein II: The New Colossus is a first-person shooter that enables a variety of different play styles. In this alternate history game, the Nazis have won World War II and have conquered the world. The player is William Blazkowicz, the Nazi killing super soldier who is part of a resistance to topple the new regime. This is a sequel to Wolfenstein: The New Order and the story is a direct continuation so I would highly recommend playing that game first. Wolfenstein II: The New Colossus is a game that I mostly enjoyed, but it has a lot of major issues that hamper the experience.

The best thing about Wolfenstein II: The New Colossus is also its biggest flaw: its variety. This game has a major identity crisis and seems to blend a lot of genres into one game. Stealth, cover-based shooting, and run and gun styles are all encouraged and the level design is centered around that fact. The player is guided to sneak through levels until they get spotted, and then you have to shoot your way out. My key issue is that none of these 3 styles are perfected and each have their own issues.

The player is heavily encouraged to begin each level by sneaking through enemy lines and silently taking down their commanders. If you get seen before you take down a commander, they will call for reinforcements. The issue is that once you are spotted, there is essentially no way to disappear and re-enter stealth. Once seen, every enemy in the area immediately knows where you are until you eliminate them all. Furthermore, getting detected by enemies feels relatively inconsistent and it felt like sometimes the enemies had the eyes of hawks and other times they were completely blind. 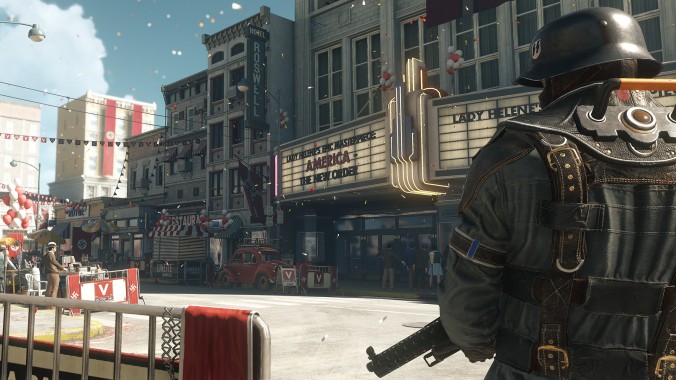 The standard cover shooting that is to be expected in FPS games is mostly discouraged. Enemies are adept at flanking and surrounding the player, so staying in one spot is a death sentence. This means that most action is run-and-gun akin to DOOM. The issue is that Wolfenstein II: The New Colossus is fundamentally different than DOOM. In DOOM, if you stay on the move most incoming damage will miss you. This is not the case in Wolfenstein II: The New Colossus because you are not going to outrun bullets. You will always be taking damage if you are not behind cover. Furthermore, recovering health in this game is far different than DOOM. In this game, you have to pick up armor and health packs that are tucked away in corners around the map. So, if you are desperate for health, you have to scramble to find a health kit. In DOOM, you can use a special “glory kill” to guarantee a health pack to drop. This allows the action to keep flowing rather than stopping to scrounge for resources. 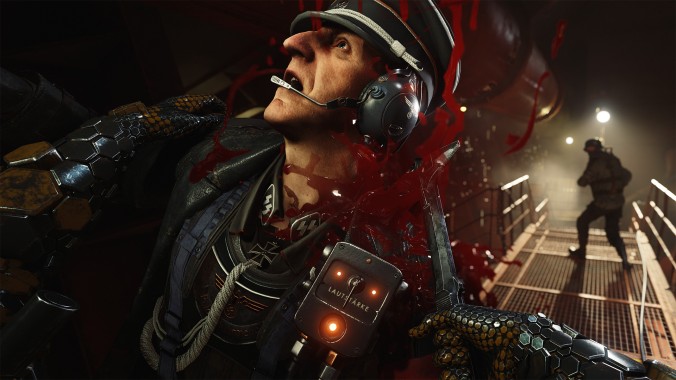 Moreover, there are a few more gameplay related issues. The first is that there is poor indication of when and where the player is getting damaged from. There were numerous occasions when I was getting shot from behind and I didn’t even know it. There had to be better audio and visual cues for damage. The most apparent issue is that the level design is just bland and boring. As opposed to a game like Dishonored or Prey, or even Wolfenstein: The New Order, this game’s levels are just too linear. You move from corridor to corridor eliminating Nazis. There are rarely any alternate paths or interesting tactics to employ. The way to play the game just seems set in stone. The player progresses from hallway to hallway stealthily killing the opposition until they get caught and subsequently go on a run-and-gun rampage.

Other than gameplay, Wolfenstein II: The New Colossus had a slew of technical issues at launch. Luckily most of those issues seem to be fixed by now. The story of the game was also pretty off-putting. The new characters that were introduced were over the top and flat out unlikeable. Their monologues and preachy speeches were unnecessary. Moreover, there were many instances where cutscenes just did not fit the tone of what was going on and felt completely out of place. It felt like the developers tried very hard to get the player to connect with the characters but they were more annoying and preachy than anything else.

Despite all its issues, I still enjoyed Wolfenstein II: The New Colossus. The game does not have any area where it shines, but the variety carries the experience. There is just something so satisfying about sneaking around and assassinating Nazis and quickly shifting into high-octane action. It is for these reasons I give Wolfenstein II: The New Colossus a 5/10. None of the individual parts are outstanding, but the sum of those parts makes for a decently entertaining game.