The Super Mario series is probably my favorite series of all time, especially the 3D entries. Naturally, Super Mario Odyssey was my most anticipated game of the year for me, even more so than Legend of Zelda: Breath of the Wild. Thankfully, I was not disappointed by Super Mario Odyssey. The Super Mario series is defined by the tightness of the controls and just how satisfying it is to move around as Mario. Super Mario Odyssey sports the greatest controls of any of the 3D entries. In addition to the classic moveset of jump, backflip, walljump, triple jump, and dive Mario has a few more tricks up his sleeve due to the addition of Cappy. Cappy, a sentient hat, is Mario’s new friend and provides a large variety of new moves to traverse the world. On top of the variety of new tricks that Cappy allows, the big addition is that Cappy can possess enemies. This lets the player use the movesets of enemies to progress through levels. It is enormously fun to chain these possessed enemies together with Mario’s standard moveset to allow for some crazy combinations to achieve a ton of distance. It is an absolute joy to just jump around the levels as Mario is known for.

Super Mario Odyssey is centered around the open-world exploration of 17 different kingdoms. Each of these kingdoms starts off with a scripted sequence that throws back to Super Mario 64 and Super Mario Sunshine. The camera zooms in on your objective, and off you go. After you complete these scripted story missions, the entire kingdom opens up for you to discover. First and foremost, Super Mario Odyssey is a collectathon. There are almost 900 objectives, known as moons, spread across the 17 kingdoms. The biggest task in collecting them is just finding them, so if you are looking for a pure platforming experience you are not going to find it here. This is just a pure treasure hunt, finding something new every few minutes, supplemented by just how fun it is to control Mario. 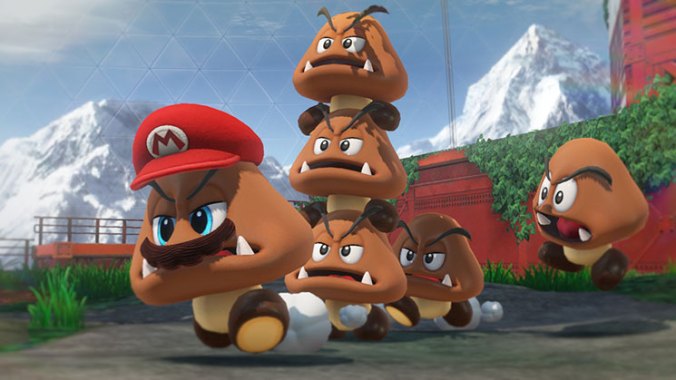 While many have praised Super Mario Odyssey, there has been a lot of negativity surrounding it as well. There are two key criticisms: it is too easy, and it is repetitive. I can understand where these criticisms come from, but I do not think they are valid considering what this game sets out to achieve. First of all, this is a Mario game, it is meant to be accessible for casual players, children, anybody can play Mario. So, it being “too easy” feels like a misdirected jab. Would I have liked challenging levels that fully use the expansive moveset that is offered? Yes. But again, this is not meant to be a challenging game. Most of the challenge is hunting down the numerous moons that a crammed into every nook and cranny of the levels. The second criticism is that while there is a ton of moons to collect, most of them are repetitive tasks or are deemed as “garbage” moons where no effort is required. This holds some weight, as many of the moon tasks are reused frequently, but I would argue that you are not meant to collect every moon. You only need 120 to beat the game, and since you open up the final kingdom at 500 moons, it seems that there are 400 extra moons tagged on. Some would argue that these are tacked on content meant to pad the game’s length, but I think otherwise. All these extra moons make it so that every player can achieve the 500-moon benchmark without straining themselves searching for every last moon. All those extra moons are just there as a buffer so everyone can find moons at an extraordinary rate, and as some extra content if you really enjoyed the game and want to hunt down some extra moons.