Can mediocre gameplay be forgiven if the narrative, story, and setting are all superb? This is a question that I’ve thought about a lot in the past, and it definitely applies to Spec Ops: The Line. While it is incontestable that the plot in Spec Ops: The Line is top-notch and may have sparked an enlightenment era for narrative driven games, I felt that the game was severely bogged down by the gameplay. This is unfortunate, as I do love it when a developer can effectively use video games as a medium to effectively tell a story. Spec Ops: The Line nails its setting, plot, and effectively uses narrative elements to make for some unforgettable moments, but even though I loved those features it is impossible to ignore the sluggish gameplay.

The setting and atmosphere established by Spec Ops: The Line is incredible. The player and his squad must descend into the depths of the buried city of Dubai. Constant sandstorms have covered the once prosperous city in a mountain of sand, leaving only small portions of the city exposed to sunlight, the rest is embedded in a sandy tomb. The player starts at what is essentially the top of the city, and slowly descends deeper into the depths of the derelict Dubai. As you make your way down through skyscrapers and across rooftop, it atmosphere changes drastically. The once sunny city dims as you dive deeper, bodies of the dead pile up, and chaos erupts at all corners. This effect of verticality is incredibly similar to the feelings invoked by games such as Dark Souls and Hollow Knight. You descend further and further down, the game gets darker and more foreboding. You reach a point in which you feel like you cannot possibly dig any deeper, but you just keep going. The use of verticality, ascending and descending, is a tactic that can be incredibly effective at invoking emotions into a player. Going up always feels rewarding, like you are climbing a ladder to victory. But going down, that is a prospect that is meant to instill terror into the player. The atmosphere achieved by Spec Ops: The Linethrough its use of vertical levels is meant to instill stress, panic, and unease in the player as you cascade further and further into hell. The setting of Spec Ops: The Line is phenomenal, and it truly makes for an unforgettable journey.

While the atmosphere established in Spec Ops: The Line is incredible, the game is mostly known for its story. The main character sets out with his 2 squad mates to investigate a distress signal sent from Dubai. The game’s story matches its setting sense of verticality, the main character is at his highest point when they game starts, at the top of Dubai. As you descend, the protagonist witnesses atrocities and horrible scenes of death and destruction. The main character’s mental state deteriorates and the entire squad begins to squabble with each other as time progresses. Spec Ops: The Line borders on being a psychological thriller as you unravel the happenings in Dubai, and you trust the main characters perspective less and less as time progresses. All of this time you are lead to a spectacular and mind-warping ending that just made me ask “What just happened?” What is really interesting to me is how effectively the developers used video games as a medium to tell a story. Many games tell a good story, but they leave you with the feeling that the story would have been better told in a movie. In Spec Ops: The Line however, it places you in the role of the protagonist, you are not just a bystander to the events that unfold. I felt sick to my stomach in many of the gruesome climactic scenes. There are a few different ways of effectively using video games as a story telling medium, and Spec Ops: The Line utilizes the personal nature of video games to tell an unforgettable story. 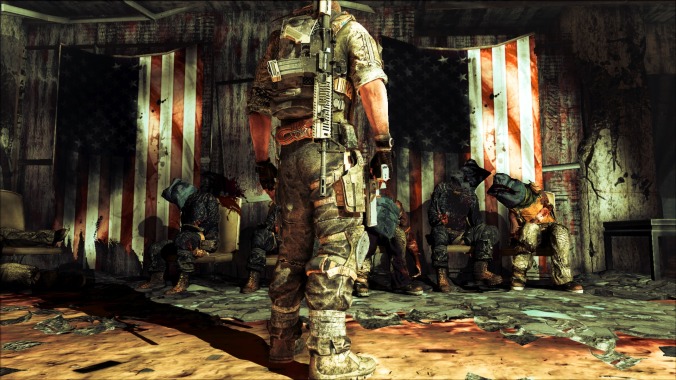 Unfortunately for Spec Ops: The Line, a key component for any game is its gameplay. Story, setting, and atmosphere all are incredibly important, but at the end of the day you still have to actually play the game to experience those attributes. It is a shame that the gameplay of Spec Ops: The Line is so disappointing, because otherwise I would consider it to be a must-play title. It brands itself as a tactical third-person-shooter, as you must tactically command your squad as you shoot your way through Dubai. This starts off okay as your squad mates are relatively useful early on, but as the game progresses a critical flaw is unearthed. As you progress, enemies get stronger, get better weapons, and number of enemies increase, but your squad mates are the same strength that they were at the very start of the game. So as the game gets harder, your teammates become increasingly useless, and by the end of the game they mainly serve as a distraction for enemies to shoot at. On top of that, the controls are just plain clunky. I’ve never been a huge fan of cover-based shooters. It always feels awkward to press a button and get “stuck” to cover, then press another button to “detach” from that piece of cover. It just feels sticky and restrictive; getting behind cover, peeking and shooting, and then detaching from the cover feels unnatural. I much prefer the fluid and open movement of games like Wolfenstein, DOOM, Call of Duty, or Battlefield. I started to get seriously frustrated once enemies began regularly tossing grenades at me because I would get stuck on the cover and couldn’t detach and get to safety quick enough. I can only describe the controls of Spec Ops: The Line as sticky, and it takes too much effort to get the character do to what you want. 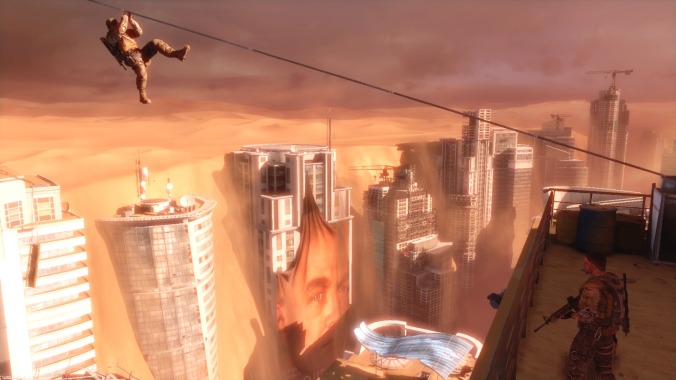 The issues with the gameplay don’t end with the useless teammates and clunky cover-based mechanics. Spec Ops: The Line falls into the same traps that many other modern shooters, in which they blend into each other and feel stale. So many shooters fall into a pattern where the player gets behind cover, kills some enemies from relative safety, and then moves to the next piece of cover, and you repeat ad infinitum. There is a not a whole lot of excitement in this format, and I often feel like I’m playing whack-a-mole as enemies pop up from their cover and I pick them off one by one. Towards the end of the game bullet-sponges make their appearance and you have to pump loads of bullets into these enemies before they go down. This is doubly frustrating because not only is it boring to deal with enemies, but bullets are relatively scarce in this game, so unloading all of your resources to kill one enemy is a pain. Moreover, Spec Ops: The Line suffers from an overabundance over enemies in the latter parts of the game. Maybe the developers intended for your squad mates to dispose of a significant portion of these enemies, but as I mentioned before, your squad mates are functionally useless late in the game. What ends up happening is that you just have to sit behind cover and slowly pick off what feels like hundreds of enemies per encounter; it’s tedious, draining, and grows tiresome quite rapidly.

As an entire package, I think Spec Ops: The Line is decent. The story and environment is phenomenal, but this is a video game and the importance of gameplay cannot be understated. While the story had me hooked, actually playing the game was a frustrating slog towards the end. I’m not sure if I can recommend Spec Ops: The Line even though I thoroughly enjoyed its atmosphere and plot. All I can say is if you believe that “gameplay is king”, stay away from Spec Ops: The Line, otherwise definitely give it a shot.