It is no surprise that a Civilization game is underwhelming at launch. Civilization IV and Civilization V for example were extremely bare-bones at the time of their release, but they were significantly expanded on with patches, downloadable content (DLC), and expansion packs. In Civilization VI, all of those bonus features that were added onto its predecessors were present at launch. Unfortunately, most of these features are so fundamentally broken that I would much rather them be absent from the game. I figured I would give the developers some time to fix the major issues or at least acknowledge that these issues exist. It has been nearly a year now, and Firaxis has not done anything besides patching some glitches and adding new, paid DLC civilizations to play as. At this point, I am worried that the developers have no idea what is wrong with their game, let alone how to fix it. For me, there are 3 clear game-breaking issues that must be addressed. These 3 issues are the artificial intelligence (AI), user interface (UI), and the various tedium that plague Civilization VI.

Full disclosure, I feel like I have to mention that I am veteran of the Civilization series. I started with Civilization III when I was young, played a good amount of Civilization IV, and I have near 1000 hours of Civilization V and play on the highest difficulty setting. Many of my criticisms of Civilization VI may not be apparent to newer players, but I assure you if you play enough Civilization VI you will understand what I am talking about. That being said, I realize that I may be harsh on this game because of my experience, so a more casual player may not care about a lot of what I am going to mention.

One of my favorite things about playing Civilization V was studying the AI’s behavior and learning how each leader acted. I could then use this knowledge in future matches to predict what a certain leader was going to do and guess how the game was going to play out. This was essentially eliminated from Civilization VI because the AI is so unpredictable and varies heavily from game to game. The only consistent thing about the AI’s behavior is that their default state seems to be hatred. They hate the player and they hate each other, often leading to lackluster diplomacy as no matter what you do everybody is just going to denounce each other.

Another factor of the Civilization series that I also really enjoyed was the sort of role-playing aspect and watching as empires expanded and clashed over territory. Every time I generated a new game I felt as if I was witnessing an alternative history, and it is a factor that I considered insanely addictive.  Unfortunately, since the AI are so wholly incompetent this role-playing aspect is also destroyed. By the modern era half the world is unsettled because the AI unwilling to expand past a few cities. There are tiny, disjointed empires instead of sprawling empires where the civilizations border each other and make for a believable world. Also, since the AI is so horrible at waging offensive wars, they will almost never conquer their neighbors or take a capital city. In Civilization V, you could expect at least 1 or 2 of the AI to be wiped out by their neighbors, making for an evolving and interesting game world. But in Civilization VI, the AI are incapable of conquering each other, they may take a single city or destroy a city-state, but they almost never take capitals. This makes for a rather boring and uninteresting world to observe. The AI in Civilization VI is what I would consider a game-breaking issue, and I doubt that I will return to this game unless the AI is amended.

Other than the AI, there are a few other major flaws that Civilization VI has that also hamper the game’s entertainment value. The next thing I want to touch on is its confusing and overcomplicated user interface (UI). In a strategy game like Civilization VI all of the vital information should be readily available to the player and there should be no clutter of superfluous information. In Civilization VI it is the other way around. The game has no problem clogging up your screen with random stuff like “England has built a granary in London!” Who cares? But you have to dig deep in order to understand key game mechanics like amenities. On top of that, most of the menus and just general layout of information is rather clunky and cumbersome to navigate. Also, the mini-map is a complete disaster. It now shows water tiles as owned land by other civilizations, the colors of the fog of war and undiscovered territory are the same, and it just feels very boxy and unpolished. They have done a little bit to improve the UI since launch, but it is still abysmal. If you want an example of a good UI in a strategy game, Fire Emblem: Fates is phenomenal in that department. There is a ton of information on the screen, it is laid out in a sensible manner, and if you want any more information on anything, you just tap on it.

I’ve heard people say that Civilization VI is a good base for a game to build upon in future expansion packs, even if it needs significant work before it can compare to its predecessors. I don’t fully agree with that sentiment, as the AI and UI are possible to fix and would significantly improve the game, but many of the core game mechanics are fundamentally broken and need a massive overhaul. This is why I am not optimistic for Civilization VI, sure the developers could fix the AI and UI, but I doubt they will scrap so many of these new features that they added into the game. Many of these new features are meant to give the game strategic depth and add more choices into the game, but they end up just becoming tedious, frustrating, and tiresome. These mechanics are: Religion, agendas, housing, the civic tree, eurekas and inspirations, governments, the new movement system, city management, diplomacy, builders, espionage, barbarians, and spies. I am not going to delve deep into why I think these mechanics are busted, as I want to keep this review at least a somewhat reasonable length. I may later do a full analysis of Civilization VI where I go deeper into these mechanics, what is wrong with them, and how to fix them. All of these issues highlight the biggest flaw of the Civilization series as a whole, which is that the game becomes boring and tedious once you have essentially won. 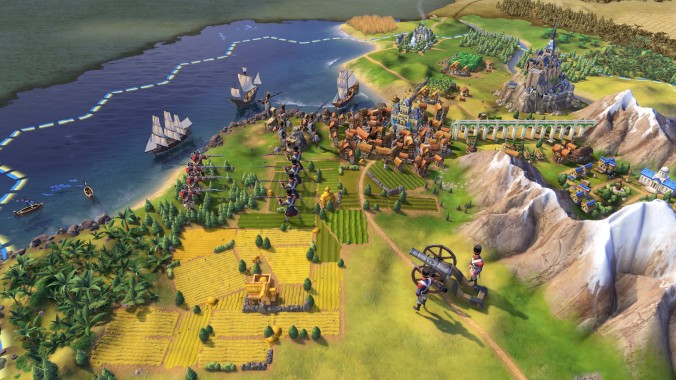 There comes a point in every Civilization match when you realize that you are so far ahead that there is no feasible way for the opponents to make a comeback and defeat you. Some people quit when they reach this point, but many like to play the game out to its conclusion. You kind of turn on auto-pilot and hit the “next turn” button until you reach victory. Civilization VI exasperates this issue because you can no longer turn on auto-pilot, you still have to micromanage all of these features that I highlighted earlier. All of these features are unnecessarily tedious, and it feels like the developers just added more decisions and micromanagement just for the sake of having more decisions. All this does is reduce the weight from any decisions, and makes playing the game a chore because I now have to make a dozen meaningless decisions every turn. The importance of these decisions is drastically reduced because of the sheer number of them. Why should I care what government policy I choose when I can change it in 3 turns anyway? The lack of meaningful decisions and plethora of worthless decisions makes for a game that feels like a chore.

There are a few worthwhile things in Civilization VI. The most obvious is the district system. Instead of everything in a city being built in that 1-tile area, now you have to establish districts on other tiles. For example: you need a campus district to build libraries, universities, and other science related buildings. From a world-building perspective it makes for a much more believable empire than in past iterations. It also has some interesting strategic properties as districts receive bonuses depending on where you place them, so you can plan out cities and what their districts will be for maximum efficiency. Another positive factor of Civilization VI is just the visuals. I think the art-style borders on being a little too cartoony at times, but sometimes you have to just sit back and admire the landscapes populated by your cities, districts, and wonders.

It’s a shame really. It seems like Firaxis genuinely attempted to make this a complete game upon launch. But in their attempts to fill up the game with content, they neglected to check if all of that content was actually any good. As it stands you are much better off buying Civilization V and all its expansions and DLC, which as an entire package often goes on sale for less than $15. It is just a way more polished and complete game, and for a quarter of the price of Civilization VI. I am not sure if Civilization VI will ever be a good game, but the future looks grim for this title. For these reasons I give Civilization VI a 3/10. Maybe it will be good after some expansion packs, but right now the game is just a mess. If you ever feel an itch to play a grand strategy game, just play Civilization V instead.