The long awaited and highly anticipated new Legend of Zelda game was released a month ago, and I have spent a lot of time playing it. Breath of the Wild is being heralded as a masterpiece, and I completely agree with that sentiment. This game is extremely unique, especially when compared to its predecessors. Breath of the Wild has a massive and completely open world to explore, and that is what makes it so special. There is a level of freedom that is unheard of in any other video games, you can do anything at anytime, that is in part why I love this game. 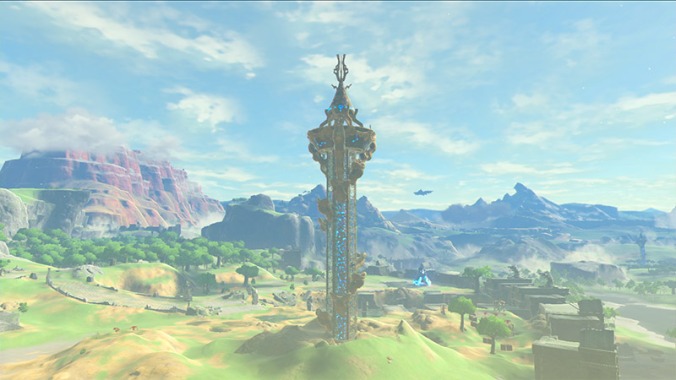 Most open world games allow for varying degrees of exploration and discovery, but ultimately restrict the player in one way or another. The main story, powerful monsters that block the way, or some areas require certain items to access, these are all methods that other open world games use to reign in the player to have them follow an expected path. Breath of the Wild throws all of that out of the window, you can go wherever you want and do whatever you want. Even the main story allows the player to tackle it in numerous different ways, you can even ignore it altogether and head straight for the final boss. There are so many creative solutions to any encounter in Breath of the Wild. Puzzles can be solved in dozens of ways, and there are numerous paths to get to any destination. Even fighting monsters allows for some innovative tactics through the use of the magical Runes that you acquire early on in the game. Breath of the Wild also allows for some creative use of the environment to gain an edge in fights. The fact that you constantly need to switch out weapons as they degrade and break forces the player to think on their feet and choose their weapons according to the appropriate situation. I am constantly surprised by new tricks, even dozens of hours into the game. Overall there is a lot of room for individuality and creativity in Breath of the Wild, it is a blast to just experiment with all the different ways to approach a single task.

The world of Breath of the Wild is massive, and its filled with things to find. There are plenty of sidequests, monster encampments, towns and stables to be found. Most importantly are the shrines and Korok seeds, which both act as a form of progression. Every four completed shrines allow the player to choose between an extra heart or some more stamina, and every couple of Korok seeds the player can increase their inventory space. With 120 shrines and 900 Korok seeds, there are plenty of these short and sweet puzzles to be solved. These exploration related objectives are a method for the player to keep up with the scaling difficulty as the game progresses. This is the most difficult 3D Legend of Zelda game that I have played by a long shot. Many enemies have the capability to kill the player in a single hit early on in the game. These enemies require to you be prepared, have precise timing, as well as creative thinking if you want a chance at defeating them. Certain enemies are extremely punishing if you misstep, which I think is a welcome change to the previously easy Legend of Zelda series. There is so much to do in the land of Hyrule, if you are worried about the world being “big but empty”, fret no more because there is no lack of things to do in this game.

There were many risks taken in the development of Breath of the Wild. The game does away with many traditional Legend of Zelda elements. Instead of using the Master Sword the whole game, now you use a plethora of weapons. Link can now wear a variety of different sets of clothing, all with different effects, rather than the green get-up we all know him for. There is voice acting for dialogue, which there has never been in a Legend of Zelda game. Traditional dungeons are swapped out for shrines and divine beasts. Link can now jump if you hit a button. Instead of memorable themes and melodies, the game goes for a much more atmospheric and understated soundtrack. All of these changes were huge risks as The Legend of Zelda series has been following a specific formula for a long time, and Breath of the Wild breaks the conventions. It has been six years between the release of Skyward Sword and Breath of the Wild. This game was delayed multiple times to polish it, and I love Nintendo for making the decision to delay the release and perfect this game. Shigeru Miyamoto himself said a famous quote that I find applicable “A delayed game is eventually good, but a rushed game is forever bad.” Many risks were made during the development of this game and Breath of the Wild is all the better for it. 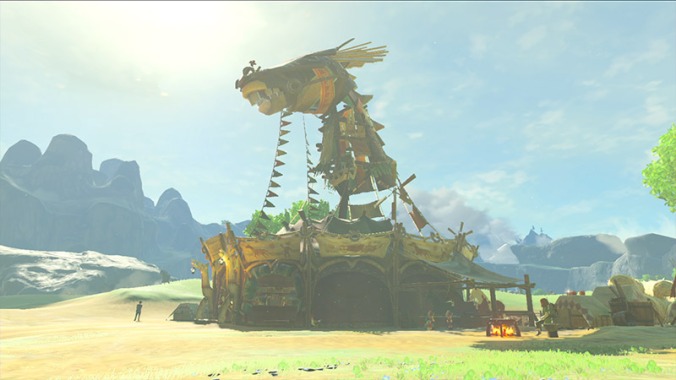 The beauty and awe-inspiring nature of Breath of the Wild is unparalleled. From rolling hills of lush grass, to dense and foggy forests, to the shifting sands of the desert, to snowy mountain tops, to rushing rivers,  there is just so much atmosphere that I just had to sit back and take in. The games magnificent environments are only complimented by its beautiful art style. I could spend hours just walking around Hyrule doing nothing but admiring all the scenery. Everything is well animated and pleasant to look at. The survival aspect of this game is also quite charming. You can no longer just chop grass to get hearts and arrows. Now you need to collect resources to cook meals that replenish your hearts as well as giving special benefits. For arrows you need to visit the small towns in stables to replenish your stock which encourages the player to interact with all the non-playable characters (NPCs) in the game. The NPCs are charming and have some depth to them, even if their quests are simple. Instead of a woman saying “get me 3 dragonflies”, they tell you that their little sister loves dragonflies but the woman is too scared to get them herself. Just a minor narrative change like that makes all the difference. Throughout the game there are many seemingly minor things that enhance the experience drastically.

I believe that no game is perfect, and Breath of the Wild is not an exception to that rule. It is extremely important to note the size of these issues, as most of them are nitpicks that I only discovered after dozens of hours of play. The first and most noticeable problem are the FPS drops. In graphically intense areas like villages or battles with many enemies, the FPS can and will drop. It happens often enough that it hurts the experience a little, but the vast majority of the time the game runs smoothly.  The first time in rained in Hyrule I thought it was atmospheric and beautiful. Then it kept raining, and raining, and raining. It feels like a third of the time in the game is spent in the rain. It is nice once in a while, but eventually it just gets dreary. The rain also stops you from climbing anything or using any fire related items, so that can slow the players progress by a significant amount. A little rain is fine, but I wish the developers had toned down the amount of rain in this game. There are a few small quality of life things that I would like to see, like faster cooking and faster animations of getting in and out of shrines. Issues like that are fairly minor but after many hours of playing the game I think I stopped caring about the shrine completion animation and I just wanted to skip it. Overall, I feel like while all of these are issues, they are fairly small and only noticeable after hours upon hours of play. In fact, all of these issues are fixable and I hope to see them resolved in future patches of the game.

Breath of the Wild manages to capture a feeling of childlike wonder and amazement. I feel like this game will be talked about ten years from now and it will be a benchmark for phenomenal open world games. I loved every minute that I played of this game. It breaks conventions and takes The Legend of Zelda in a whole different direction, and I appreciate the risks that the developers took in making this game. The amount of delays, setbacks, and risks all paid off in a spectacular fashion in the experience that is Breath of the Wild. The amount of creativity, thoughtfulness, depth, and soul in this game is astounding. It has a few flaws that I would like to see fixed, but they are specks of dust on the masterpiece that is Breath of the Wild. I firmly believe that this will be remembered as one of the greatest games of all time. For these reasons I give The Legend of Zelda: Breath of the Wild, a 10/10. I cannot recommend this game highly enough, and it is a must play for anybody and everybody.